Hello. It’s me again, the Fairelander. If by some small miracle you are reading this message, then perhaps you will understand my plight.

In my case, that void is the blank page I now hold in my hand, one page among many that I found washed up on the steps of Midas minutes before the Great Bongs of Doom sounded and the Fairelands vanished into the aether.

END_OF_DOCUMENT_TOKEN_TO_BE_REPLACED

What would you want, if you could have anything? 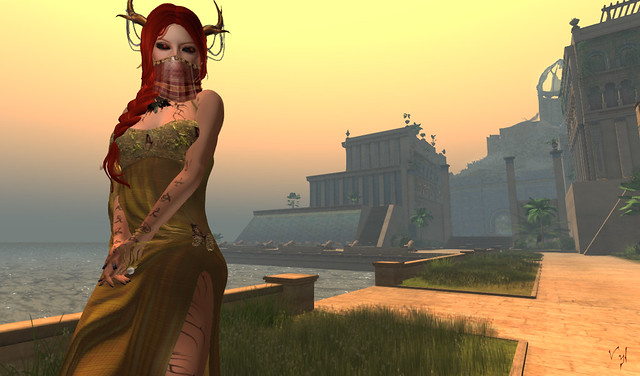 A seductive question, perhaps the most enticing combination of word or thought that could be conjured. Once asked, it captivated; either by focus and endless longing, or through purposeful, eternal avoidance through fear of what may, or may not be possible.

END_OF_DOCUMENT_TOKEN_TO_BE_REPLACED

As the sun baked down on Midas, the news spread like wildfire that Fantasy Faire exceeded their goal of 40K and surpassed it at 60K, thanks to an anonymous donor. Local chat was quickly filled with Fairefolk in celebration mode, and as tears of happiness streamed down my elven cheeks, we decided to do the next best thing. Shopping!

There are some incredible stores on the Midas Sim.  Kynne and I found ourselves in the deviousMind store and after much “Ooohing” and “Ahhhing” we settled on these gorgeous Ishara Snake Silks. END_OF_DOCUMENT_TOKEN_TO_BE_REPLACED

Somewhere within the ancient city of Midas a hungry power stirs. A power the city was once named after. He awakens, and the city is not golden enough for his taste. Too much green. Too much growth. Too much life. He knows just how to fix that… with a Touch.

The goddess of life and growth, Ishtar, will not stand by and let him ruin her hanging gardens. She calls upon the Fairelanders to help her in this fight. Will you answer?

Alia Baroque is caught between the battle of wills of these two ancient beings, sworn to follow the designs of whoever wins.

Join us in Midas today at 4 – 6 PM SLT to pick your side and choose what will happen to the city.