This year Fantasy Faire will once again be offering Roleplay classes for those who aren’t familiar with or don’t feel quite comfortable with Roleplay.  Come, listen in and hopefully next time you are offered an opportunity to RP, you will be able to jump right in!

Friday, April 24th at 10am slt:
How To Prevent/Decrease Lag In A Roleplay Environment ~
Taught by Bluezy Bleac of Firestorm Support
During this class you’ll learn what the causes are for lag and what, if anything you can do about it. Also, because complexity is a large part of lag, we’ll talk about what it is, what you can do with it, and how you can limit your own.

Friday, April 24th at 11:30am slt:
RP Etiquette and Consent ~
Taught by Rutger Coakes of Sanctuary
Who says I can’t say that? Geesh, why’d they get so upset? We’ll cover some fundamentals of how to conduct yourself in Second Life Roleplay, some common mistakes to avoid, and a few considerations that might not have occurred to you. Bring your thinking caps and be prepared for a “prim and proper” discussion!

Saturday, April 25th at 5pm slt:
Playing Psychopaths – A Practical Guide ~
Taught by Tanith Rosenbaum of Sanctuary
Psychopaths are fun. Psychopaths are also different. For the average human, it’s quite difficult playing a convincing psychopath or sociopath. During this class, we will go over what makes a “good” psychopath, which things to avoid, have demonstrations and practice sessions where everyone can practice on everyone else. Leave your goody two shoes at home.

Saturday, April 25th at 7pm slt:
Characterization, And Constructing A Character ~
Taught by Martine Serpente of Sanctuary
Who do you want to be playing? Who will you be playing? How and where to potentially get ideas; Small details and large that can help you work out a framework to play a vibrant, believable, and fun character. One with both strengths and weaknesses who can contribute to a more fair and enjoyable atmosphere for all involved.

Sunday, April 26th at 10am slt:
Building is Roleplay ~
Taught by Strifeclaw Resident of the Grizzly Cubs
Strifeclaw will be presenting an intermediate class on how building, the environment, and everything around you can become roleplay.

Sunday, April 26th at 2pm slt:
Sim Design for RolePlay Environments ~
Taught by Maxwell Graf of Rustica
Max will offer a discussion of techniques and processes for creating a successful roleplay sim.

Sunday, April 26th at 4pm slt:
The Story of Gor & Tips on Gorean RP ~
Taught by Kaiila Mahoney, Owner of PCOG and Healer’s Hall of Gor
Have you ever been curious about what goes on in Gor? Want to know if the stories you’ve heard are true? Come and listen to Kaiila Mahoney, a longtime player in SL Gor, speak about it. Bring your questions!

Sunday, April 26th at 6pm slt:
Playing Roleplay Consequences ~
Taught by Martine Serpente of Sanctuary
Roleplaying your consequences. How good and bad things can contribute to making your character far more realistic, deep, and fun to know about! What happens does not always just go away!

Monday, April 27th at 11am slt:
Voxel: The Overlooked Object Building Toolset ~
Taught by Maxwell Graf of Rustica
A review of voxel object design using these older but super powerful design tools. Also, how they could revitalize creating within SL!

Monday, April 27th at 5pm slt:
How To Properly Enter A Roleplay Scene ~
Taught by Angela Carling (Angel Chauvert)
Would you like to join in a roleplay but not sure how to enter the scene without disrupting things? Angel will teach how to do that the correct way.

Tuesday, April 28th at 11am slt:
Weapons – From Inception to Conception ~
Taught by Colton Drechsler Of The White Armory
Today Colton will give us a walkthrough of the design process, building elements and structure for building an impeccable weapon.

Tuesday, April 28th at 6pm slt:
Rping A Tiny In A Big Avi World ~
Taught by Tea Gupte ~
Have you ever wondered what it would be like to rp as a tiny being in a world full of giants? Tea will give us her thoughts and experiences as a tiny, and hopefully it will help you decide if you’d like to give it a try!

Wednesday, April 29th at 5pm slt:
Magical~Fun~Times – A Practical Guide to Role Playing Faeriekin ~
Taught by ColeMarie Soleil ~
Our very favorite Fantasy Faire Fae will speak to us today on the different types of faes, how to play them and how to interact with them!

Thursday, April 30th at 11:30am slt:
Incorporating Fantasy Foliage Into A Roleplay Sim ~
Taught by Elicio Ember of Cerridwen’s Cauldron
Elicio will be speaking about creating effective and believable RP environments, as well as plant landscaping.

Thursday, April 30th at 4pm slt:
How To Prevent/Decrease Lag In A Roleplay Environment ~
Taught by Bluezy Bleac of Firestorm Support
During this class you’ll learn what the causes are for lag and what, if anything you can do about it. Also, because complexity is a large part of lag, we’ll talk about what it is, what you can do with it, and how you can limit your own.

Friday, May 1st at 11am slt:
Cross-Playing Gender In RP ~
Taught by Leander(MadMechaMessiah Resident) of NeoVictoria
In roleplay, possibilities are endless and the purpose of this class is to explore gender expression and playing both within and outside of players’ gender identities.

Friday, May 1st at 6pm slt:
Managing Negative Emotional Responses To And During Roleplay ~
Taught by Tanith Rosenbaum of Sanctuary
Everyone feels emotions during roleplay. It’s actually one of the major draws, one of the major reasons why people roleplay, to feel emotions, emotional bonds and experience emotions they don’t get to experience otherwise. However, this inevitably includes emotions that are unpleasant or downright disturbing. Learning how to manage these emotions and turn them into positive experiences is one of the major skills a roleplayer has to learn to fully immerse in and enjoy roleplay, and possibly the most difficult one. In this class, we will go over techniques for doing that and practice them together.

Saturday, May 2nd at 9am slt:
RP Combat At its Best and Worst ~
Taught by The Faire’s Own Elayne Diavolo
There are a few different roleplay fight styles. Some are based on dice rolls, some are based on number of words you’ve written, some are based on time. Come and discuss the ways to fight without swinging a weapon! 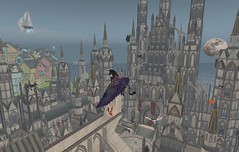 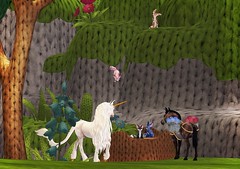