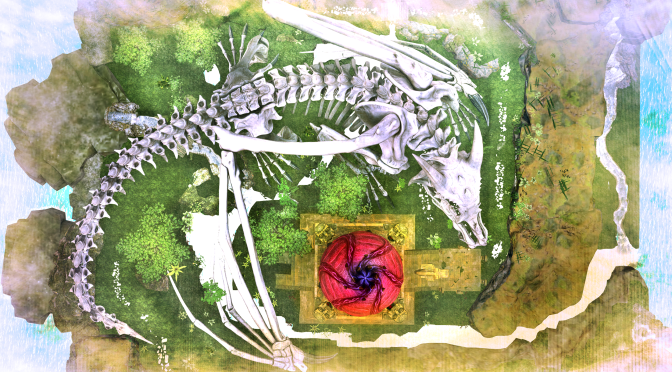 Beq Janus and Elizabeth Jarvinen (polysail) are the world builders of the Faireland of Ostara. Beq talks about all the Fairelands she’s built, how the inspiration and building process of Ostara worked between her and Elizabeth, and the secrets to be found within this mysterious region.

How many Fairelands have you built? Does it get any easier in time? What makes you return and take part in this particular form of insanity again?

Ostara is my sixth Faireland I think, and my fourth working with Liz. Does it get easier? in a word…No. That’s not quite the full story. In the beginning it is difficult because you don’t realise quite what you have undertaken. There is a blissful ignorance that “next time will be fiiiine” because you know what you are doing now… Except every year we push a little harder and reach a little higher. This year is a classic example. After Trollhaugen, and the towering mountain of a Troll I’d felt rather becalmed creatively and what with everything else going on in the so-called real world, we took a break in 2020. Come 2021 we felt we needed to do something, but were still somewhat bankrupt with regard to ideas.

After a discussion with her majesty Fantasy herself, we were inclined to do something jungle-based, but we needed a hook. Looking back over recent Faires we decided that Dragons hadn’t been covered for a while so we’d go for that. As you can see at the Faire this year we were not alone in thinking this.

I’d literally not built a single thing since Hugh and was worried about my ability, and our available time (it was already January at this point). Liz said “S’fine, we do eggs, dragon eggs in a jungle” and from that simple and easy idea we end up with Ostara, and a bespoke anatomically coherent giant dragon skeleton. It is clear that Liz does not learn her lessons. three years ago we made Athenaeum, in her words “A simple library” until in Beq’s head it became “a circular library” ever thought how hard curved book cases are? “oh and it’s exploding, shattered bits everywhere, torn asunder by a giant inter-dimensional claw“.

Why do we return? I have no idea, if you find out please tell me….

More seriously, once it was the cause, and the opportunity to be a part of this amazing event in a way beyond what I had done before. Now it is about the friends, the Worldbuilder family and pushing ourselves forwards with them. It is scary, the stress levels derived from fear of failing are immense, but you have an amazing set of people all around you too, every one of them at least as scared as you!

Do you have a favourite Faire memory? What kind of plans do you have for this year’s Faire, what do you want to do?

I don’t think I have a single favourite memory. There are standout memories and ironically the oldest of those is before I was a World Bulder back when I was the roving reporter for Saffia’s PrimPerfect magazine. There was this wonderful scene that took place on Alia’s build The Tides, where Ceri Quixote, our much-beloved giantess, was stood knee-deep in the ocean towering above an elf avatar who was stood on the plaza nearby. The elf in turn was towering over the tiny form of a petite avatar. It was a wonderful scene showing the great range of SL Fantasy.

Tell us of your Faireland. What sparked its birth, what is its inspiration? Does it have lore, secrets, stories? Tell us everything!

So…Where to start…
It starts and ends with an egg.
Having decided on Dragons, eggs and Jungle Ostara was born. Mostly out of desperation as I think we were already late telling “she who must be obeyed” what the region was about. The dragon idea was not solely anchored in the lack of recent history, we were initially tagged to build the FF Radio region which features the FaireChylde. We did not know that the Fairechylde was to be rebuilt and thus the thought of accommodating a dragon in a jungle full of dragon eggs came about.

Ostara though is very European. She is a Goddess in germanic culture, though the veracity of this is somewhat disputed with some thoughts that her existence was made up by Bede as there is no corroborating evidence. From Ostara comes Eostre and thus Easter, (Eostre is still the name used for the Wiccan Sabbat that falls in April and celebrates (re)birth. )

During my research I stumbled upon Ostara and the hare. The article discusses the alleged origins of the Easter Bunny.

“I have been trying to track the origins of Easter rabbit myths, and of course very little primary source material exists for oral traditions. There seem to be two versions of the story of Eostre and the hare: that she found a bird with frozen wings and saved it by transforming it into a rabbit, which retained the ability to lay eggs; and that a bird who laid beautiful eggs was so proud that Eostre was irked and turned it into a rabbit, but she was so moved by the rabbit’s despair that she allowed it to lay beautiful eggs once a year.”

We meanwhile had a mysterious dragon laying eggs and this formed ideas in my head that the European tale was simply a corruption of our memory of the time of dragons. Quite how we get from giant, fire breathing, scaled destroyer of towns to fluffy rabbit I leave to my LitFest friends to muse over. We were looking for a hook, how do we make a jungle of eggs engaging? and so the skeleton appeared in the early designs that Liz waved at me. This all fitted into the story in my head, bunnies laying “annual eggs” is “clearly” derived from dragons laying a solitary egg that will hatch over a thousand years.

I suffer massively at the hands of imposter syndrome, building for the Faire lines you up with amazing artists and creators which is really unnerving. A lot of the design comes from me flailing about crying “I can’t do this” and Liz swatting me about the head with something heavy and pushing me forward. We seem to have gotten into alternating between building the central thematic pieces and the shops and other features. I built Hugh, while Liz made the wonderful village on his book, Liz builds the dragon and egg while I built the cave temple stores and Ziggurat. I don’t think this is by deliberate design it just seems to work out that way.

For our poor lady dragon, Liz spent a lot of time studying various animals both real and fictitious, alive and extinct. She shared the following view of one of her reference collections with those who joined us on our recent LitFest tour.

Of course, just building a beast of that scale is only part of the challenge. How do you integrate it with the scenery in a way that makes it feel as if it is part of the jungle? For this we would regularly export the terrain height map and I would import that to Blender (my tool of choice) where I’d convert it to mesh and send that to Liz, she could then work in Maya (her tool of choice). To aid her in this she rigged the skeleton to allow it to move as a whole rather than having to fiddle with individual bones. This is not only more convenient but also prevents the skeleton from seeming too disjoint.

Meanwhile, I drew inspiration from places as diverse as Turkey and Jordan, Mexico and Peru. The cave temple stores are related to the ancient Likyan (Lycian) tombs that are found on the so-called turquoise coast in SW Turkey, near Dalyan. More famously the rock carvings of Petra in Jordan may be familiar to people. The main Zigurat that became the store for our sponsor, The Forge, is much more traditional South/Central American. We tend to throw a lot of ideas into a shared pinterest board.

In the past, we’ve used the Aditi (beta) grid heavily for testing things. The beta grid has been significantly broken for months now and seems low priority at the Lab for any fixes so instead this year I set up an OpenSim grid to use for developing the region.

Here is a shot or two of our early planning.

OpenSim is a brilliant way to develop on a scale like this because it is free, has no upload costs and does not enforce the frustrating 64m limits that we have in Second Life. I run it on an older machine that is no use for SL, though it is possible even to run it on the same machine.

Another big advantage of using OpenSim in this way is that you can use regions as a scratchpad and just shut them down when you decide on a different design. I think I had 8 regions in use for various things during the early stages. Here, for example, is an early concept for the “jungle” Faireland before we’d settled upon the egg and dragon:

And here we see two versions of a possible layout.

If you look carefully at the closest one, you’ll see a rowboat floating in the air. At this point (early Jan) we were tagged to be building the FF Radio region that accommodates the FaireChylde and this boat was our placeholder.

We had planned to have more secrets dotted around.
Every year I have my hare/rabbit placed somewhere. He has followed us from Faireland to Faireland ever since my second Faireland – Aurora. 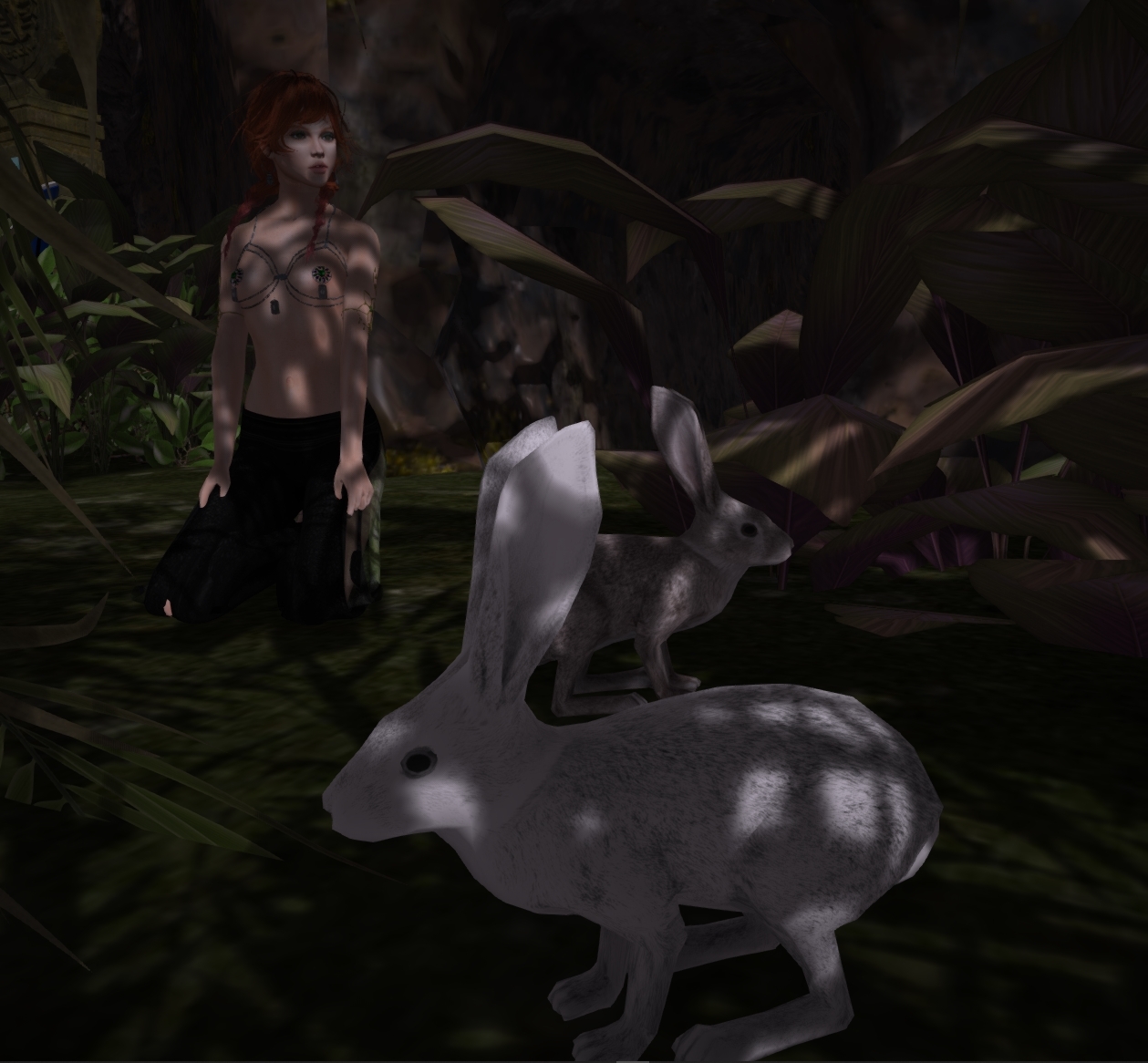 This year, he and his companion (that he met in Trollhaugen) are camped out very close to the arrival point but opposite the path. But anyone spotting them will also find the secret tunnel the you can just make out behind me in the photo. The tunnel leads up to the top of the cliffs where you find stunning views but also the “secret” waterfall. 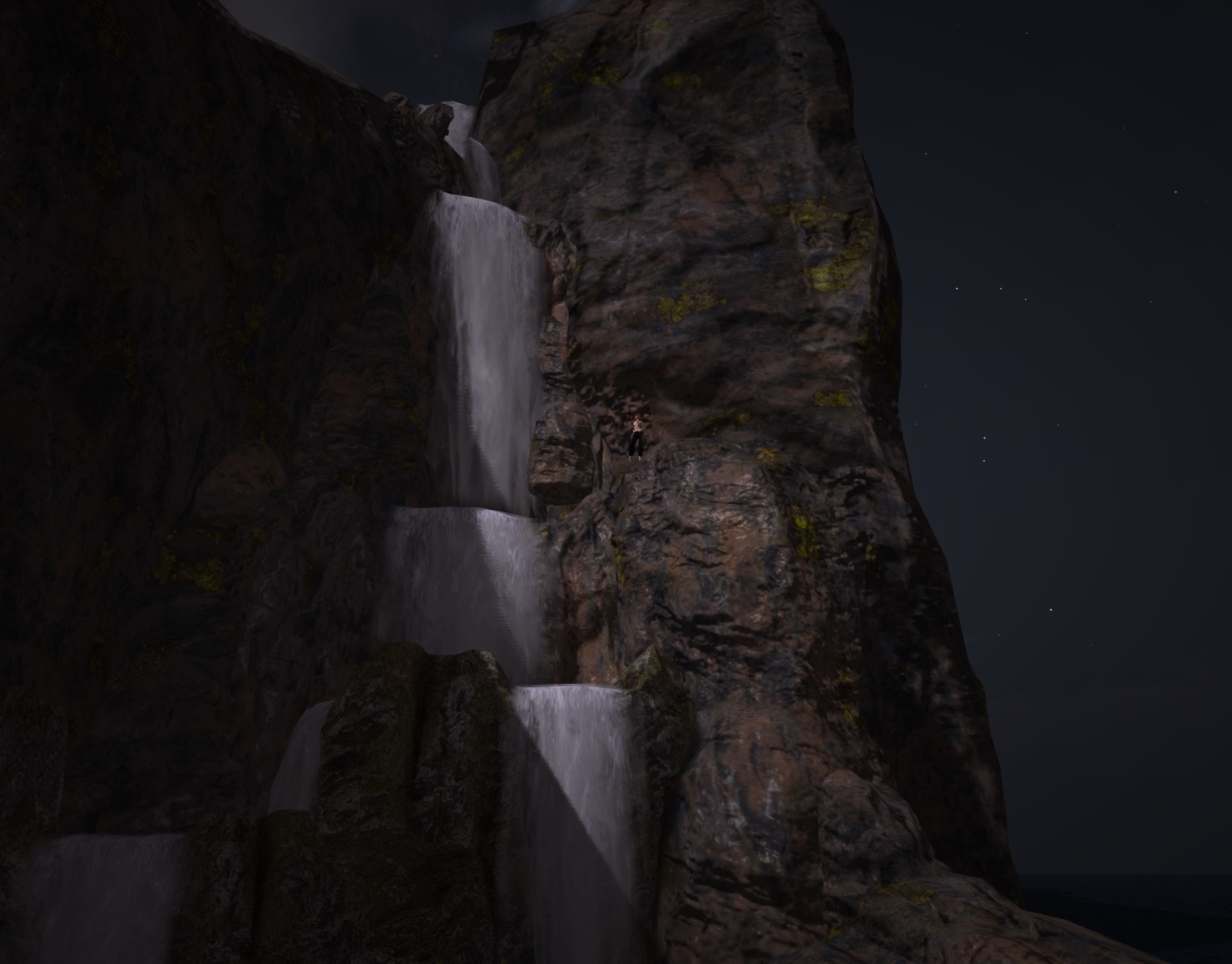 There’s also  rough sketch I drew for one of the “carvings” that I never used in the end. It was to be carved into the cliff face by the landing point. But I could not get make it work well enough in the end. 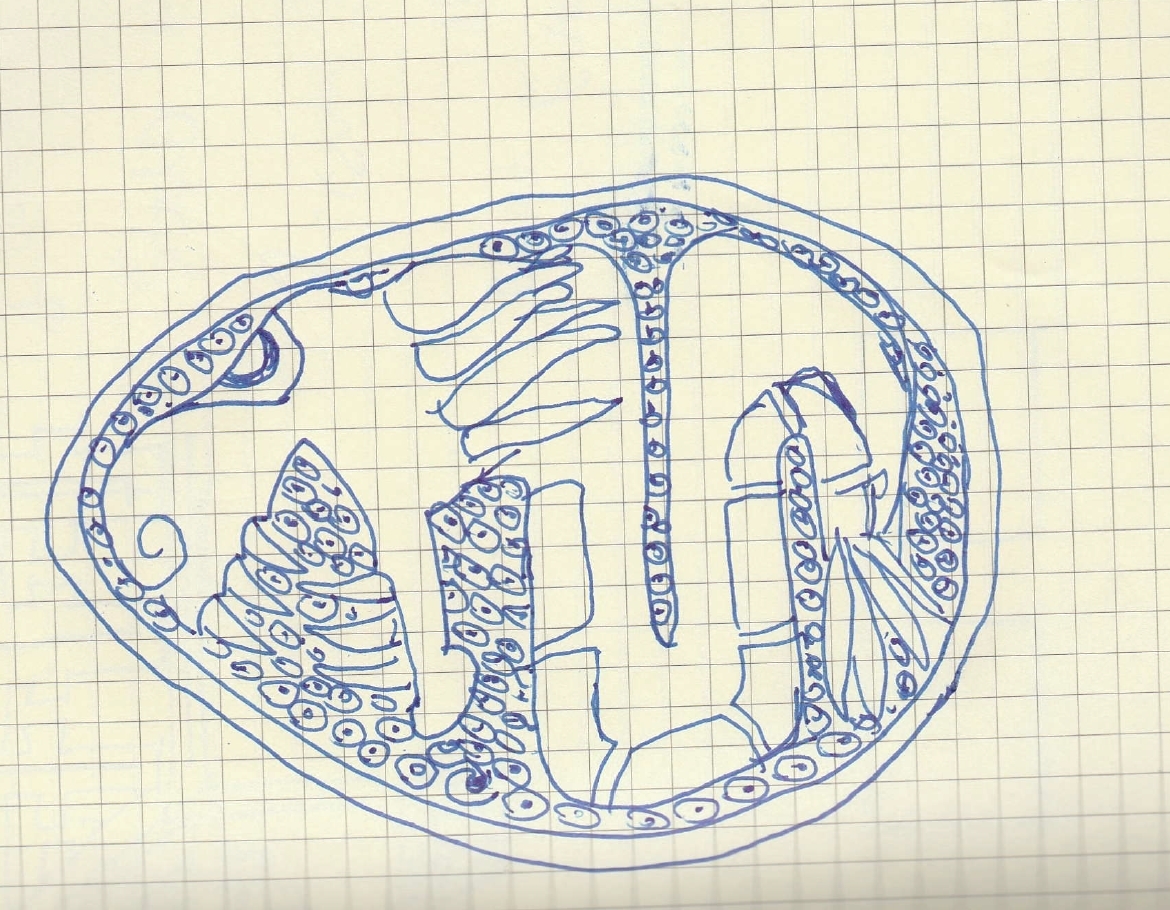 Thank you, Beq, for taking the time to chat with us. Thank you both of you, Beq and Liz, for bringing this fantastic Faireland to us.