Now that I was in the right place, all I needed was for it to be the right time. Scheherazade’s face was literally plastered on the walls, after all, and translations of One Thousand and One Nights lay scattered across the tables in this little oasis. There was even a nice fire going.

But that was three hours ago. Now it’s well past midnight, and these scrolls are getting awfully heavy. Maybe I’ll set them down for a bit…

No, it’s not that I don’t trust you! Not at all. Fairelanders are the most trustworthy people I’ve ever met. It’s just that Fairelanders also happen to be the most curious and, shall we say, inquisitive. How else do you find all those secret nooks in the Fairelands, like the labyrinth and the little grotto hidden by RxH’s shop in Melusina’s Depths, or the soul buoys locked in the tree roots underneath the Lamented Fens? The Bard Queen sure picked the right demographic when she tasked us all with finding the seed packets for her garden. If you didn’t know how to cam through a thicket in Agra Adara before, you sure do now.

What’s that? You want me to tell you where all the seeds are?

Ha! What makes you think I completed the quest yet?

Huh? You have pictures?

Oh. Uh. I can explain. Darnit, Aznana, what’s the point of me wearing a mask if you’re just going to tell everyone that we made off with the quest prizes?

I was going to tell you…eventually. I just thought I’d have the complete chronicles of Vedika and company first. Just goes to show you that it’s never a good idea to plan out your Faire travels in too much detail. Why, if I hadn’t acted on my impulse to get on the S.S. Ringmaster, we wouldn’t be sitting here talking in the Drifts of Anamnesis, would we?

Hey. Did you hear something just now? Aside from me waxing pedantic, that is. Something like rustling?

At least, I think it is. I should be the last one to assume a person’s gender.

“M-madame Scheherazade?” I call out. “Is that you?”

Silence. Nothing but the crackling of fire and the pounding of my heart.

“I’m so glad I caught you. I was hoping you could help me with something… A story about a Wood Elf who went missing, and the two heroes who went looking for her. Have you heard of them?”

“So you know something? Please, tell me! I have to know how it ends! I’ve been waiting an entire year to find out, and I spent practically all of the Faire searching…”

She swivels around, skirts blowing in the breeze, and then, with the grace of a cat, pounces off into the sand.

Dinkiesauce. She is the person who tricked the sultan into keeping her alive by spinning yarns with epic cliffhangers.

No choice now but to chase her. Please come with me? It looks like she’s headed for Queensgarden, and with all that dense foliage, I could use another set of eyes. 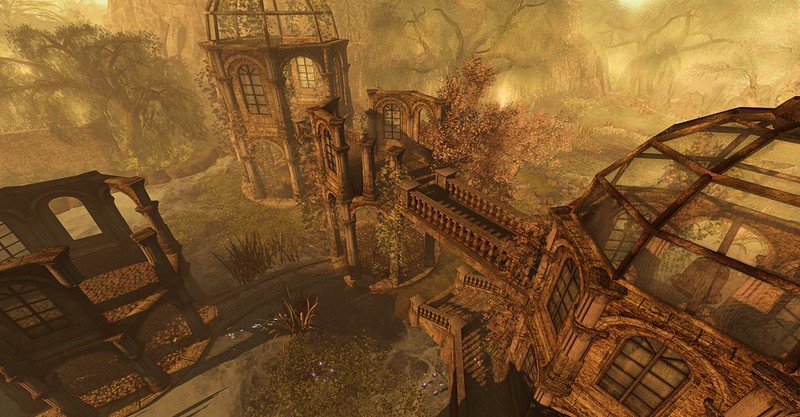 Um, is it just me, or did the trees multiply by five since I last visited? I can’t even tell what time of day it is.  A very smart lady to get everyone planting, that Bard Queen. Given the growth rate, I don’t think the Unweaver could hack through this in one year. Two, even.

Well, I guess you know what this means.

No, I wasn’t thinking of burning the garden down! How terrible! Though now that you mention it, it would make finding Scheherazade easy…

I’m kidding, I’m kidding! What I meant to say was that we should split up. Divide and conquer. I’ll take the southern part, you take the northern part, and we’ll scurry westward in a zig-zag pattern until we reach either Scheherazade or the gateway to Zodiac, whichever comes second, whereupon we’ll report right back here.

What? What’s with that face? Oh… I’m doing it again, aren’t I—planning everything out in too much detail?

Tell you what, let’s make one meandering pass through. Let fate be our guide. If we don’t find her before the Bongs of Doom toll and the Mists fade away, then I guess—as much as it hurts to say—we’ll just call it a Faire?

2 thoughts on “Chronicles of Adair: The Search for Scheherazade”