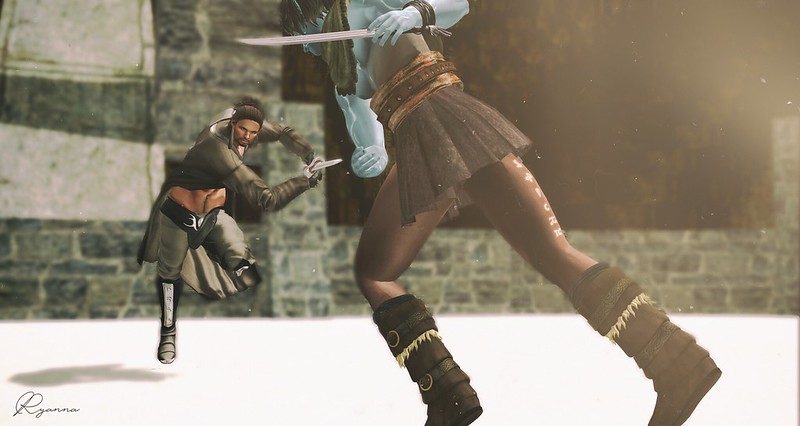 All he had to do was stay alive.

Na’Rayh spent the next two days housed in the barracks of the coliseum with the other participants in the Game. Sparring drills took place at various times during the day and they were encouraged to use that time to go up against each other and train. Many did but not Na’Rayh. He had trained enough during his travels and the only thing sparring accomplished was giving away any advantage a person had. So instead he stood off to the side and watched. He studied their moves and looked for any weaknesses that would help save his life.

With the eclectic mix of participants Na’Rayh saw some styles he recognized from his travels and others he did not. Sometimes a real fight broke out during a spars and a person would get severely injured and request to be taken off the list. That was the only way to leave the list with honor.

The two days came and went, then it was the day of the Games. Everyone still left in attendance geared up and gathered by the metal gate that lead to the floor. The din of the coliseum reverberated around them. Out of the sixty men who signed up only forty remained and Na’Rayh was one of them. A cheer rose up from the spectators and he pushed forward to try and see what was happening.

The coliseum was full of life. Hawkers snaked their way through the crowds using the opportunity to show off and sell their goods. Gambling men took bets on the outcome of the days match.

A general cheer sprung up from the stands as the King, along with his daughter Caelia, accented to their box where they were to watch the Games. He was old and getting on in his years. The elaborate embroidery on his dark colored robes concealed his fragility from any onlookers. He should have been in bed, not here watching the match.

Taking her seat, Caelia was doing her best to control her anxiety over what was to come. She had keep note over all the men who exited the list due to injury and secretly hoped Na’Rayh would be one of them. Now she would possibly have to watch him die.

The arena floor was empty with the exception an announcer who started out to the floor.  It was his job to speak of what was going to take place, but Caelia wasn’t interested.  She leaned slightly forward in her seat and looked towards the metal gate where the men would walk through.

Her father reached over and took her hand. “It’s no different than war, my Love,” he said as he gave a squeeze to her hand. Caelita knew about war. The result of the last war was the reason she was in this position in the first place.

She sighed but did not turn her head to look at him. “This isn’t war, father. It’s a senseless battle to win my hand.”

“It’s a war for the crown and the kingdom.” He sounded put off and disgruntled. “A man who is not willing to die for his kingdom isn’t a true king at all.”

“You are giving your kingdom into the hands of a person who may not know the first thing about ruling.” She had seen the names on the List and many of them were from some powerful family in the neighboring Kingdoms.

A loud trumpet blast silenced Caelita for a moment, and it was quickly followed by the roar of the crowd as the metal gate to the coliseums’ barracks began to open and the men made their way on to the field. She scanned the faces to try and find Na’Rayh before taking her fathers hand in her own and pleading with him. “Father please. You can stop this.”

The intensity in her voice made him pause for a moment. Caelita pressed on. “For me? Do it for me. Please Father. Na’Rayh’s down there.”

“Na’Rayh…?” For a moment she thought that he would end the Games, but instead he pulled his hand out of her grasp and stood, stepped forward to the edge of their booth and lifted his hand in a call for silence.

The King looked out to the men standing on the floor and spoke. “Some of you have traveled far. Others have lived in this City their entire lives. All of you with the same goal in mind but only one will leave victorious. Let the Games begin.”

Even as the King was sitting back in his chair, the participants converged upon each other.

The sound of striking steel clashed with the surround cheers. No one rooted for people during a battle, and yet they were.

At first Na’Rayh didn’t want to kill anyone unless he had to and he played on the defensive – only going after the ones who came to him. He’d fight them off, one by one; and sometimes two or three people ganged up on him at a time. It was not long before he started attacking first and soon his blade became slick with blood. All he had to do was survived. He made a promise to Caelita and he was going to keep it.

He started to notice a pattern after with the fighters. People made temporary alliances, the bigger men ganged up on the weaker – and vice-versa – to take them out. Death cries mixed their way into the cacophony of sounds and the coliseum floor slowly became a cemetery. A couple times Na’Rayh went down but his will to survive was stronger than the pain of his wounds and he was able to get back up.

Na’Rayh was breathing heavily after pulling his blade out of the side of a man nearly twice his size when he received a sharp kick to his ribs that knocked him to the dirt. He struggled to catch his breath and rolled to his right, barely missing the sword that pierced the ground where he once was.

Na’Rayh scrambled to his feet while taking a hasty look around him, wary of multiple attacks.  However, he hadn’t noticed how quiet the coliseum had become but now he did and it was because the only ones left in the Game were himself and the tall man staring him down from a few feet away.

From what he could see, the man was human. His stance and overall appearance was that of the dessert people from the Southern Kingdom. He carried wounds, but not many. They both stood still, sizing the other up and waiting to make their move.

It was now or never. Na’Rayh rushed the other man. They traded steel and blows, neither giving.  Na’Rayh landed a solid blow to the man’s jaw that was returned with a fresh slice to his side.  The fight waged on and both men were getting tired. Fatigue settled on both of their features but the other man had more stamina. With a forceful blow to the chest he got Na’Rayh on his back and started to beat down on him with a series of blows that were nearly impossible to reflect. Na’Rayh couldn’t get up and he soon felt his consciousness slipping from him.

The last thing he remembered was the feeling of warmth pouring over his chest, and a sharp scream ringing in his ears.

Special thanks to Rozen (Check out here work here!) for posing with me!